Like all new and hip start up companies they have their own language. But the only term you really need to get is "droplet". This is one server instance, the rest is quite standard.

When creating the droplet you get the option to install a stock operating system or "one click Apps". The operaing systems available are:

Each have multiple versions available. The "one click Apps" are currently: 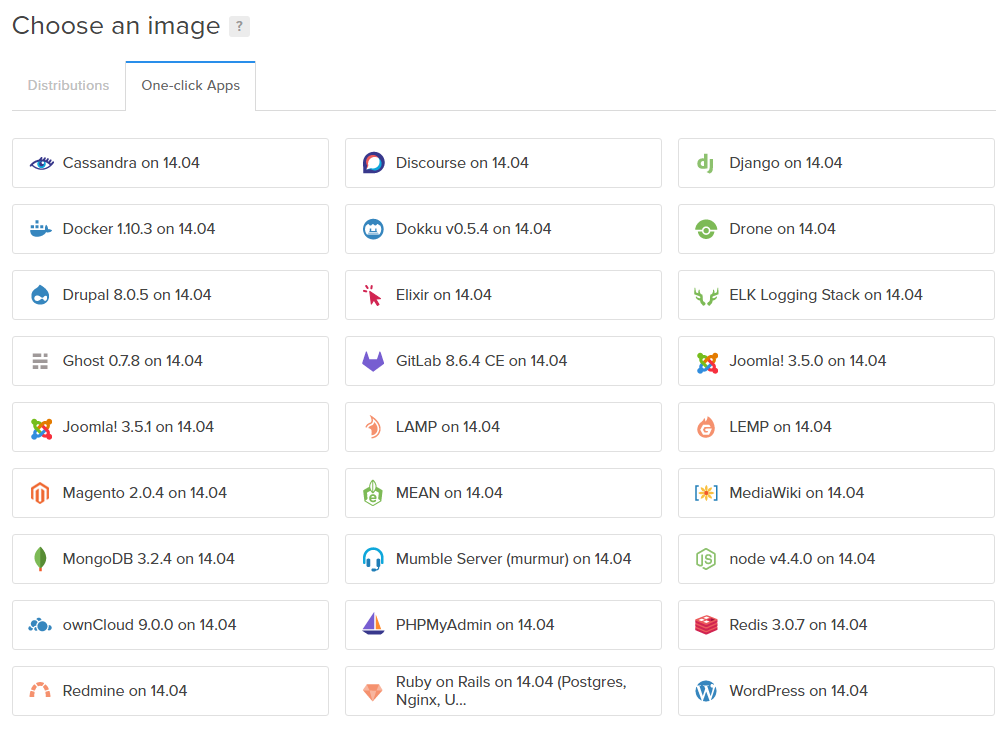 Alternatively you can create a snapshot of an existing server and then launch a new droplet based on that. Unlike EC2, as far as I can tell, you can't import images. Then again, this was never really a feasible task.

The droplets can be housed in 7 data centres around the world, currently this is:

You can add additional services to your droplet, such as:

The Private Networking feature is basically a VLAN / Firewall solution that isolates your droplets from the public internet. This is solved in software via IPTables.

The Backup feature provides backups with the last 4 states that you can use in case of a catastrophic crash. It costs 20% of the running instance.

The IPv6 feature obviously associates you not with an IPv6 address.

The User Data feature are just custom data that you can associate with your droplet.

This is all configured via a very simple to use interface, that makes launching droplets almost fun.

The Floating IPs feature enables to have a fix IP address with varying servers behind it. This may be needed when implementing a high availability service; since waiting for DNS to catch up may take a while.

The Domains feature is basically a DNS server. The key feature here is that the domains are associated to droplets. This if a droplet restarts and gets a new IP address, this is automatically handled. Digital Ocean does not provide domain name registration, so you need to tell your registrar that the DNS server for your domain is hosted by Digital Ocean.

The PTR Records are reverse DNS records. This is an ancillary to the domains feature.

Finally, not only is the interface nice and easy to use, Digital Ocean provides an HTTP API to manage your cloud.

All in all I like the service way more than EC2. AWS is a mess when it comes to administering it and Digital Ocean is a breath of fresh air.